Ready to level up your insights?

Get ready to streamline, scale and supercharge your research. Fill out this form to request a demo of the InsightHub platform and discover the difference insights empowerment can make. A member of our team will reach out within two working days.

Quality insight doesn't need to cost the earth. Our flexible approach helps you make the most of research budgets and build an agile solution that works for you. Fill out this form to request a call back from our team to explore our pricing options. 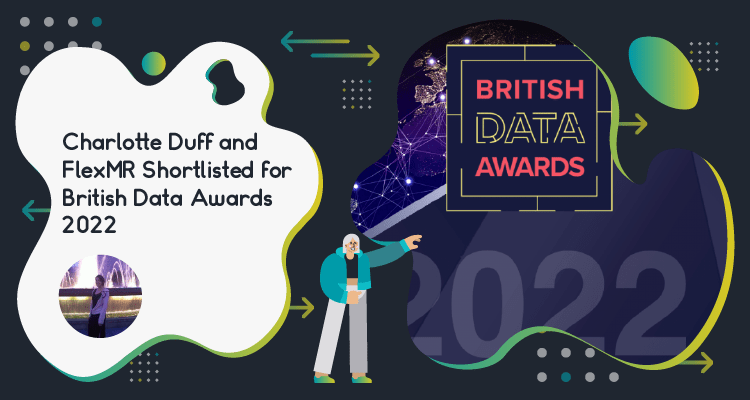 The achievement highlights the firm’s ongoing contribution to the enterprise data ecosystem and insight-led decision making.

The British Data Awards is an annual campaign that sets out to uncover data success stories. Organisations taking part this year include FTSE 100 giants, public sector pioneers, technology unicorns, agile not-for-profits, and innovative start-ups among others. And with 158 nominations received, competition to be named a finalist proved to be particularly tough this year.

Jason Johnson, Co-Founder of Predatech and British Data Awards judge said: “The standard of entries received this year has been particularly high, which has made judging a great privilege, but also a real challenge. All the finalists should be incredibly proud of their achievements, and for helping to remind us of the sheer talent and ingenuity that makes the UK such a global powerhouse for all things data. I look forward to celebrating their successes on the 19th May.”

Paul Hudson, FlexMR CEO, said of the announcement, “This is a fantastic honour. We are proud to be acknowledged for our contribution to forward-thinking insight teams and the wider data ecosystem. It’s especially promising to see talented leaders, like Charlotte, recognised for their skill in interpreting data, guiding decision-makers to customer-centric conclusions and delivering real, impactful insight.”

The 2022 shortlist has been whittled down by an all-star panel of judges, including:

Finalists will be celebrated, and winners announced, at an awards ceremony in London on the 19th May. FlexMR looks forward to celebrating a wide-ranging and impactful variety of contributions to the UK data economy with other finalists at the event.

FlexMR is the Insights Empowerment Company. As markets grow and consumers evolve, brands must fight to stay at the forefront of industry. To succeed in this competitive landscape, research teams need an insights partner they can rely on. A partner dedicated to their success. That’s what we do. We thrive on making insight more relevant, more accessible and more impactful - whilst overcoming the challenges that modern research, product and marketing teams face.

To discuss press and media enquiries please contact Christopher Martin, FlexMR CMO, by email at chris.martin@flexmr.net or via telephone on 015395 65455.

We love to meet passionate research and insight professionals. If you'd like to arrange a chat with one of our team at an event we'll be attending, contact Chris Martin by email at chris.martin@flexmr.net or via telephone on 015395 65455.

Want to be notified when new MRX Lab podcast episodes are published? Subscribe to receive updates and listen around the web using any of the services below.